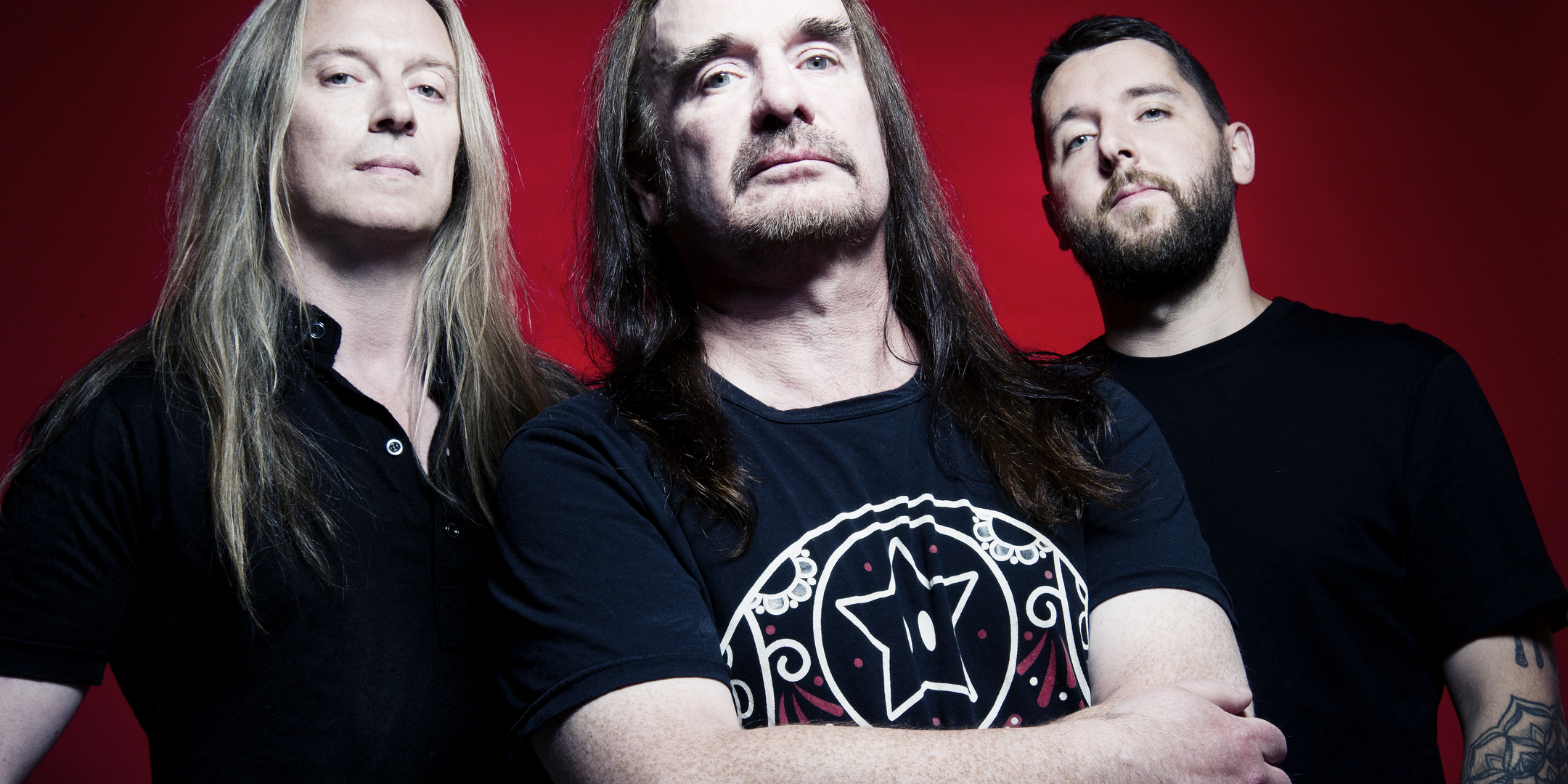 Carcass with Immolation at The Vogue in Indianapolis on Monday, May 23, 2022!

Ferocious and uncompromising in their execution, CARCASS’s ability to intricately dissect the innards of death metal, and display them for us to sonically understand has been their point of excellence for over three decades. Last December (2019) the band released their first single in over 5 years “Under The Scalpel Blade,” followed by a 4 song EP entitled Despicable (October 2020), setting a potent precedent for the full-length album to come in 2021: TORN ARTERIES. With the album title itself referencing an old demo created by original drummer Ken Own back in the 80s, TORN ARTERIES sits as a bookend on the modern side of the CARCASS discography, connecting directly back to where everything began over 30 years ago.

The album artwork also rings reminiscent of the grotesque photography that appears on classic CARCASS album covers like Reek Of Putrefaction of Symphonies of Sickness. Artist Zbigniew Bielak traveled outside his normal wheelhouse to bring forth a time-lapsed set of photos showing vegetables shaped like a heart, rotting over time upon a white plate. This form of artwork was influenced by Japanese Kusôzu, meaning: ‘painting of the nine stages of a decaying corpse.’

“It’s very clean, white, which we’ve never done before,” explains Vocalist and Bassist Jeff Walker, “it doesn’t look evil, or typically death metal, but I like how clean it is; almost like a coffee table book.” This new album presents images, lyrics, and sounds that so distinctly scream CARCASS, but ferry us into a new era of production, songwriting, and art altogether.

“I think as our 7th album, it does stand out from the others both sonically and stylistically,” explains Walker. “You can definitely tell that it’s CARCASS; when you drop that needle on the vinyl, when you hear that guitar tone, you can tell it’s Bill Steer, but each album is always a product of its time.”

With TORN ARTERIES, each track stands unique from the rest in its approach to guitar, bass, vocals, and drums, along with all the finer details. Filthy and dominating guitar work creates thick layers of tone and melody, piling on top of each other like the weight of dead flesh in tracks like “Kelly’s Meat Emporium.”

“The working title for Kelly’s was originally ‘Stock Carcass,’” laughs Walker “we knew that one was a real meat and potatoes track for the album.” Meanwhile the elevated speed and catchy beat in “Dance of Ixtab” tell a robust and airier story, one that is certain to get a reaction from live crowds. “We built this song around the beat,” explains Walker, “we had an approach to each song that was a definite idea. It’s all about ‘what haven’t we done before?’”

Curious about the lyrics? CARCASS bets you are but don’t expect them to be an easy puzzle to solve. Over the years metalheads and the world over has referenced CARCASS’s complex, bizarre, and gore-filled lyrics with affection, humor, and fascination. This time around will require fans to actually purchase the physical album, and closely examine the artwork in order to place the lyrics in their proper order. “I’d rather people spend time actually going through the record, listening to it, taking the words out as they hear them, and from there try to draw their own conclusions of what the lyrics are, instead of delivering them on a plate,” chuckles Walker.

Recording and Production for TORN ARTERIES weren’t as simple as sitting down for a few weeks and knocking it all out but rather spread out over the course of approximately 1 year bouncing back and forth between England and Sweden. Initially, drummer Daniel Wilding did session work in Sweden at Studio Gröndahl with David Castillo while guitars were recorded at The Stationhouse with James Atkinson in Leeds, England. Eventually needing some form of the residential location to finalize vocals, bass, and other guitar work, the band headed back to studio Gröndahl in Sweden to continue work in a very relaxed atmosphere with Castillo. “There was no real big plan to do it this way, the process just organically grew on its own,” says Walker.

Most will find that the only real struggle when indulging in TORN ARTERIES is fighting the desire to start it over the second it finishes. It covers substantial new ground for a band with such a reputation, while still retaining that addictive, time-honored CARCASS sound that has come to represent the face of true death metal.

Just as one can smell a storm swelling on the horizon, the cataclysmic tremor that is IMMOLATION approaches to unleash its latest, immense creation: ACTS OF GOD. Due to be released in the winter of 2022, this 11th studio album serves as the next chapter of IMMOLATION’S Death Metal epic. With 5 long years passed since the most recent studio album, ATONEMENT, ACTS OF GOD vigorously showcases IMMOLATION’s ability to consistently create fascinating sounds, while still keeping their feet firmly rooted in the old school, New York Death Metal for which they are renowned.

Emblazoned with a haunting new masterpiece by artist Eliran Kantor, ACTS OF GOD displays a trifecta of angelic beings desperately trying to prevent one another’s flesh from melting in a blackened light from above. The muted colors and ethereal images will ring familiar to fans of IMMOLATION’s previous album covers. “We wanted this cover to feel much darker; more melancholy and hopeless. The music has always been very dark, and a lot of Kantor’s work had the feeling that we were going for; the semi-surreal colliding with a classic, almost renaissance feel,” explains founder and vocalist/bassist Ross Dolan. “It’s unnerving. It really reflects the music perfectly,” agrees founder and guitarist Robert Vigna.

The album’s third track “The Age Of No Light” is a powerful, hard-hitting song with an extreme yet catchy melody. “It’s quick, hits hard, and gets straight to the point” explains Vigna. Consistently changing speeds and patterns throughout, the song is short but remains both dynamic and memorable.

“Blooded” has all the usual IMMOLATION elements: the slow, the fast, the explosive, the big overlaid sections of groovy harmony eventually dropping into evil, ripping guitar work. “It’s a little powerhouse,” describes Vigna, “it’s straightforward, and it has all the elements you would expect from us in a nice, neat package.”

A song like “Immoral Stain” is a slightly mid-paced track with an intense, creepy atmosphere. Equipped with plenty of unusual moments, the beat is catchy, dark, and echoing. The searing guitar starts to recite a story and then quickly begins a conversation with thunderous vocals and a vociferous beat. “That whole section of build-up just needed to be done exactly as it is. That’s what makes it sound different and interesting,” describes Vigna. Much like the rest of the album, while the lyrics cover the usual, general topics of genuine evil and the great deception of religion, the specifics are most certainly left to the listener’s interpretation. Fortunately for IMMOLATION fans, there is no shortage of corruption and catastrophe in this world.

Fittingly, the concluding track “Apostle” was the last song written for the album. “Some of those chorus sections have a weird almost dream-like quality,” describes Dolan. Its steadily-growing momentum discharges rounds of guitar solos and relentless vocals which eventually lead way to an explosive finale to the album.

The creative journey for ACTS OF GOD began with years of notes, and an abundance of inspiration. With Vigna at the helm of the structural writing, as usual, further composing and concepts were tossed back and forth amongst all 4 members. Eventually, they began to skeletonize the beginning of what would become a full-length, studio album. While the recording process and entering the studio can be a very sterile experience for some musicians, the ferocity of the demos combined with the expertise of a long time friend and recording counterpart Paul Orofino of Millbrook Studios (BLUE OYSTER CULT, BAD CO, GOLDEN EARRING), assured that this would not be an issue for IMMOLATION. “Having such a level of comfort is key,” remarks Dolan. Final touches were brought about on the mixing and mastering by Zack Ohren of Castle Ultimate Studios.

Firmly aligned with Nuclear Blast Records, the often coveted sound of IMMOLATION has reemerged from the depths of a cursed and cruel world to illuminate our minds and ears with exquisite, sonic destruction.